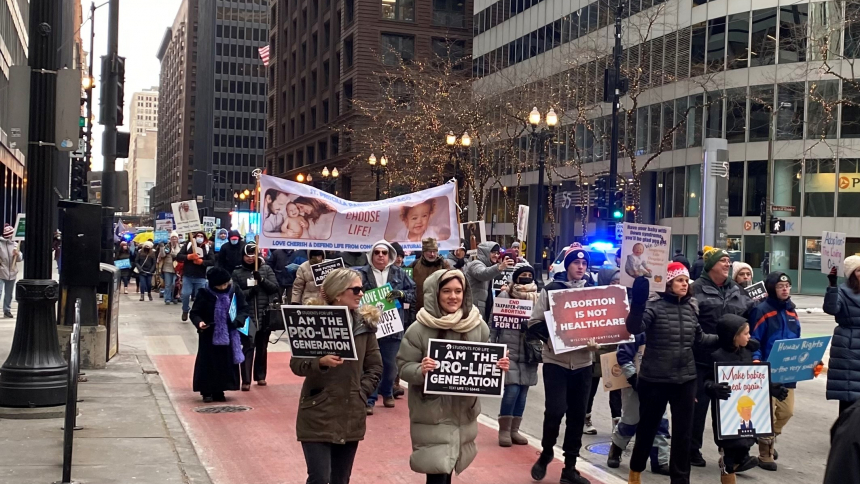 For Diocese of Gary supporters, the Jan. 8 trip to the annual Chicago March for Life was just one of several steps throughout their journey to promote life.

About 50 people from the diocese traveled in two buses to the Chicago march following Mass at Our Lady of Consolation in Merrillville with Father Rick Holy, coordinator of the diocese’s pro-life activities. They joined about 4,000 people and listened to speakers including Sister Alicia Torres, Chris Butler, senior pastor of Chicago Embassy Church, Kevin Grillot, executive director of weDignify, and more.

Cathy Bartczak attended the Chicago march for the first time. “I think the highlight for me was seeing all the youth there,” said the St. Michael the Archangel, Schererville, parishioner and secretary of the parish’s Respect Life ministry. “The speakers were inspirational but having all the young people there carrying signs and responding so enthusiastically really gave me hope. It made me feel that this generation may actually be able to put an end to this atrocity.”

One of the organizers of the diocesan trip, Clark Gloyeske, agreed. “I really believe this is a year of hope and success,” he said. “I really believe Roe v. Wade will be overturned this year … God has blessed this nation, and I believe we will have some conversion of our leaders. It will take time, but it can happen one heart at a time.”

The Chicago March for Life was held two weeks prior to the 49th anniversary of the U.S. Supreme Court’s Roe v Wade ruling that legalized abortion, resulting in more than 62 million lives lost. St. John the Evangelist parishioner Amy Goggin attended the Chicago event with her two young daughters. “We loved seeing, listening and experiencing the energy that many of the young people brought to the march. I think it’s important to teach young people to be active in the pro-life movement as early as possible,” said Goggin, the director of religious education for the St. John parish.

She leads by example – going regularly to pray the rosary at the hill outside the Planned Parenthood offices in Merrillville and educating young people about the importance of life from conception to natural death. “They can see the two sides of the issue right there,” Goggin said. “It’s so evident which side stands for all that is good and true and which side values selfishness and death.”

Similarly, Joe Cascone brought two of his sons to the Chicago march. “Taking this ‘pilgrimage’ with my two sons and hearing some of the awesome speakers at the rally was an excellent experience,” said Cascone, a parishioner from St. Joseph in Dyer. “All the other marchers are great people.

“It is so important to me that they and all young people stand up and protect the pre–born,” Cascone said of his sons Frankie, 14, and Sam, 22. Their generation is a ‘Generation For Life.’”

Cascone said the Chicago trip was a precursor for his family’s trip to the National March for Life in Washington D.C., which they were scheduled to attend for the first time from Jan. 19 to 22.

The Knights of Columbus sponsored the bus trip which was open to “all who believe in life” and included youths from St. Patrick and St. John the Evangelist, Gloveske noted. The actual National March for Life was set for Jan. 21.

“In a sense, Chicago was a ‘dry run’ to prepare us for the D.C. March,” Cascone said. “This is our first time for the National March; we are so excited. The K of C did such a great job putting the D.C. pilgrimage together.”

Gloyeske said many participants condider the Chicago March for Life the first of many steps they are taking in 2022 to promote the pro-life movement. For example, it is not too late to participate in the Nine Days for Life novena for the protection of human life, which is slated to conclude on Jan. 27. More information can be found at 9daysforlife.com.

The diocese hosts a First Saturday Traveling Rosary Prayer Service for Life at various parishes. Organizer Mark Gabrione encourages interested people to join the Facebook group. The Feb. 5 service will begin at 10 a.m. at St. James the Less in Highland. From March 2 through April 10, there is a 40 Days for Life spring campaign, in which people pray outside Planned Parenthood offices in Merrillville.

Gloveske believes this year is really important for the pro-life movement and encourages people to find their niche. “People’s interest in this is driven in part by spirituality. People should just pray and find out if this is something God is calling them to (support). We are here for life!”