Families celebrate lives of the lost with Mass, rosary, altars and food 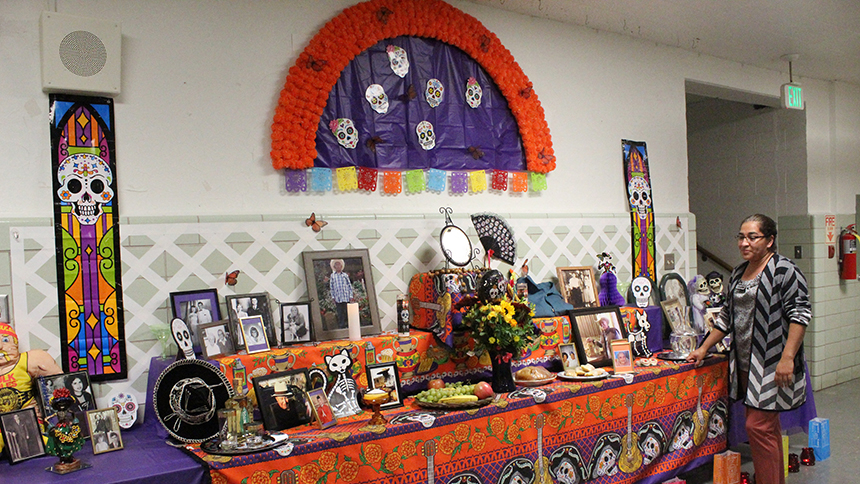 LAKE STATION – When they are lost to us, we mourn the dead, but when they “come closer” during the traditional Dia de los Muertos (Day of the Dead) remembrance on All Souls Day each year, it is a time of celebration.

That’s exactly the tone that parishioners at St. Francis Xavier, a largely Latino congregation, did on Nov. 2, marking Dia de los Muertos with a Mass of Remembrance, an outdoor procession to the adjacent parish cemetery to pray aloud the rosary, and a social gathering. Hot chocolate and Pan de Muertos (sweet bread) was served as families admired the colorful ofrenda (Altar de Muertos) created with photos, candles, flowers, stylized La Catrina (elegant skulls), favorite foods and offerings to the deceased, all in an effort to bring their spirits back to their families, if only for a day.

“We remember our loved ones who passed away, and the best way to do that is to pray for them,” said Father Jaime Perea, pastor at St. Francis Xavier. “Joy has surpassed our sadness, is stronger than our sadness, because (earthly) death is a step to eternal life.”

In his homily, Father Perea spoke of losing both his only remaining grandmother and an uncle within the past year, and his sadness in not being with them when they died. “Today we remember our loved ones, and probably how much we miss them,” he added.

“The priest is the minister of the Church (chosen) to be present at the time of death and also at the time of new life, at baptism,” Father Perea noted. “We use holy water and the Paschal Candle (at a baptism) as a sign of the light of Christ, and we use holy water, a white garment and the Paschal Candle at a funeral, too, as a sign that the deceased believed in the Resurrection, which goes to ( a belief in) eternal life.

“Today we pray (that our loved ones) may pass over to a place of light and peace … and that we follow that light,” Father Perea said.

“I lost my dad, an aunt, my grandparents and two family friends,” St. Francis Xavier parishioner Miriam Nava said as she inscribed their names in the Book of Remembrance before Mass. “I want them to know that they have someone who still thinks of them, prays for them and wants to make sure they get to heaven,” she added.

Margo Diaz, from Portage, also a St. Francis Xavier parishioner, said she came to remember her father and sister, both lost to COVID-19, in December and January, respectively. “We couldn’t have funerals, so this is a very special day for me,” she said after adding their names to the Book of Remembrance in church.

James Schever, who attends St. Josaphat Ukrainian Catholic Church in Munster and is a trustee for Knights of Columbus Council 3283 in Lake Station, set up a display of 135 lit votive candles in front of the altar in remembrance of each of the deceased members of Council 3283 on Dia de los Muertos. “I really enjoyed the (Mexican) music, and I prayed for my father, a past grand knight of Council 3283,” he said.

Dia de los Muertos originated in Mexico as an Aztec tradition celebrated during the summer harvest season, but is now widely celebrated globally in the Mexican culture to commemorate loved ones who have passed away. The holiday is a joyous celebration as loved ones share stories about the deceased with other relatives.

In the 16th century, during the Spanish colonization of Mexico, the dates of the holiday changed when pagan rituals were incorporated into Catholic celebrations, so today’s celebration of Dia de los Muertos contains a blend of pre-Hispanic traditions and Christian religion.

Families create and decorate altars to honor loved ones who have passed away, setting them up in homes, churches and cemeteries and containing photographs, flower, favorite foods and other ofrendas – or offerings – meant to represent the four elements of fire, water, wind and earth, and to attract the spirits of their beloved dead.

Lillian Agreda, a St. Francis Xavier parishioner, fought back tears as she approached the Altar de Muertos in the church hall. “It is wonderful,” she said as she pointed out the confirmation photo of her son, Manuel, who died Jan. 31 at the age of 21. “I miss him very much,” she whispered.

“This is part of being a (church) family,” said Antonio Velez, who arrived early with his wife, Martha Velez, to help with Dia de los Muertos preparations at their parish. “It is important that we do everything we can for the Lord and for his Kingdom,” said Antonio Velez. “We cannot be benchwarmers, but must be active participants.”