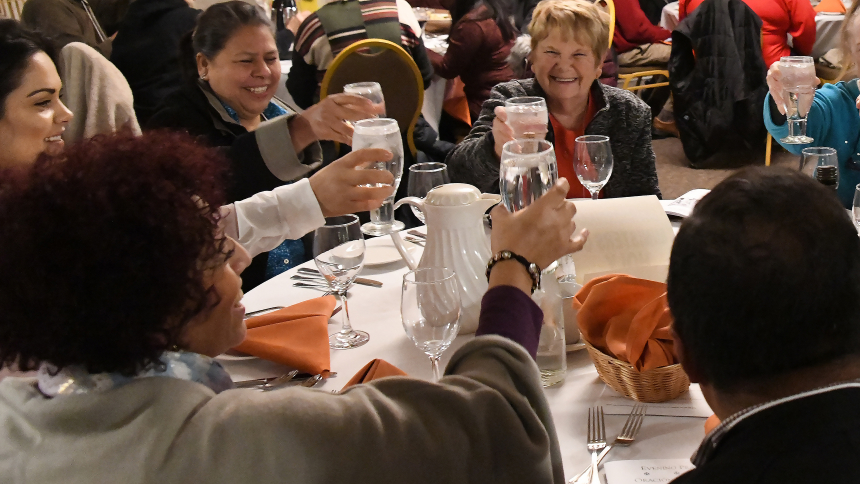 Assembling to hear the truth passed down from the apostles and to participate in Eucharistic Adoration can be appropriately described as “awesome,” said the bishop. “This appreciation for the Holy Eucharist and the Word of God are both things that should prompt us to be, as we say, ‘joyfully gathered.’ This is really awesome that we can be here today.”

Before processing from the church to the Trinity Hall, liturgical conference-goers lit small votive candles which they carried to light the way.

As a diocesan musical group entertained, guests enjoyed hors d'oeuvres and beverages before sharing an Agape Meal that Father Martin Dobrzynski, director of the diocesan Office of Worship and pastor of St. Michael the Archangel in Schererville, explained was modeled after the Church’s knowledge of first century A.D. gatherings and the Greek word for Christian love.

Marie Brown, lector and Extraordinary Minister of Holy Communion at St. Teresa of Avila Catholic Student Center in Valparaiso, said the church service “was very prayerful” and that she appreciated the quiet time. “I figure the meal is intended to remind us of the Eucharist. There’s a whole thing to learn about the meaning of the word ‘agape,’” she added.

After an evening of inspiration, liturgical ministers re-assembled on Saturday morning for training and renewal sessions after a Morning Prayer service and keynote address by Steven Janco, M.C.M., D.MIN., a musical director, composer, author and clinician who explained “mystagogy,” which he defined as “unpacking the mysteries.”

The Catholic Church, Janco pointed out, “is known for education, (and) we spend a lot of time getting people ready for something – baptism, confirmation or marriage. Mystagogy comes after something. A lot of times we expect that after (receiving) the sacrament, people can just figure out themselves what to do nex

Preoccupied with details like where to stand, when to speak and when to put a hand on the shoulder, added Janco, post-event discussion often includes an analysis and evaluation of the event itself, and not on what receiving the sacrament means.

Offering an example, Janco conducted an audience participation exercise, asking attendees to share their favorite thing about the Friday night session, drawing a variety of responses.

A comment by Father Dobrzynski on Friday that drew a positive response was his explanation of the difference between a volunteer and minister: “When you are a volunteer, you can always say ‘I can’t come today, I have something else to do,’ but when you are a minister, it means having a responsibility to your ministry and putting the needs of the community first. It’s a calling, something you discern.”

Liturgical ministers new and experienced fanned out after the keynote for sessions focusing on their specific calling.

Janice Gatons, a nurse and minister of care at St. Michael the Archangel in Schererville, reminded those who bring the Eucharist to the faithful – both young and old - that they are disciples who “bring the Kingdom of Christ to the world. Missing the Eucharist during the time we couldn’t go to church (during the COVID-19 pandemic) made us even more aware that everyone needs the Eucharist.”

Petra Steele, a retired high school English teacher and parishioner of St. Mary in Crown Point, advised lectors to speak “twice as loud and half as fast. The congregation you’re serving can all read, but they cannot all proclaim, a distinction we should make.”

Know the content of the reading, she urged, and repeatedly rehearsal out loud. “You are reading ideas, not words,” Steele said.

Music ministers under the tutelage of David Herr, assistant to the Office of Worship, and seasoned music ministers Claudia Pienta, Tina O’Drobinak and Alison Powell, rehearsed a variety of new hymns and psalms and discussed new offerings available in several hymnals.

Powell urged the music directors to make “musical choices that convey (the spirit of) the Mass and attract more participation” by the congregation.

“People say they just want to sit and listen to the choir, because it is so beautiful,” said O’Drobinak, and I tell them that then we are going to stop singing, because we are not doing our job.

“When people say they don’t want to sing because they don’t have a good voice, I say, ‘Whatever voice God gave us, let him listen to it,’” she added.

Father Dobrzynski, who guided the art and environment ministry training and renewal, defined church decorations as an offering to God, “and ‘offering’ means spent, which is how we learn to offer ourselves to God.”

That implies using fresh flowers and real candles, at least around the altar, he stressed. “When you burn a (real) candle to God, it is ‘spent.’ It shouldn’t last forever (like an artificial light).”

Some of the best-attended sessions were the Spanish-language training programs, which drew a group of parishioners from St. Joseph church of Holy Family Parish in LaPorte. As lectors, Jesus Vidal said, (through an interpreter) he learned how to read scripture, how to reverence the altar and how to dress.”

Jim Schmitt, a St. Patrick parishioner from Burns Harbor, said he is returning to the ministry of care after the death of his wife, his former ministry partner. “I decided it was time for me to get back into serving,” he explained. “When I visited a nursing home, I realized that someday that could be me, sitting in a chair, looking out the window and wishing that someone would bring me the Holy Eucharist.”

BY MARLENE A. ZLOZA and ANTHONY D. ALONZO