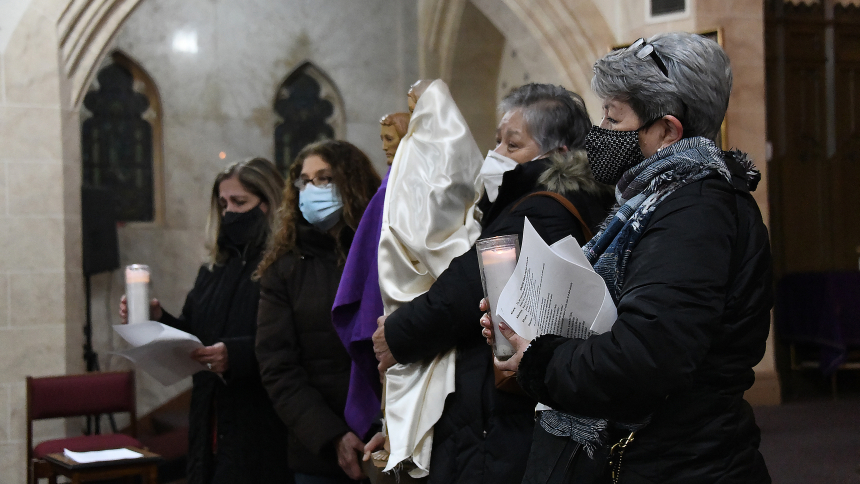 In several parishes throughout the diocese, the Advent lead-up to Christmas mirrored centuries old traditions of Spanish origin.

Churches hosted a novena called Las Posadas, and both English and Spanish-speaking Catholics shared in dramatic re-enactments of scenes found in Scripture that give an account of the Holy Family’s preparations for the nativity of Jesus.

Spanish for “The Inns,” Posadas remains popular in the Spanish-speaking world and is making in-roads with faithful of other ethnicities. Participants and observers sensed both “sadness” and “celebration,” in the gatherings that lasted from Dec. 16 until the vigil Mass for Christmas.

Parishioners at St. Margaret Mary in Hammond hosted dozens of visitors for each night of Posadas. Student actors fulfilled the role of live acting parts, representing the members of the Holy Family as well as innkeepers and shepherds.

A Bishop Noll Institute sophomore, Sebastian Olaguez, volunteered to play the part of St. Joseph. The 15-year-old responded to the casting call in his religion class.

“I said, ‘why not?’” recalled Olaguez, who wanted to spend time in the Church rather than just at home. “It’s a great way to gather around and appreciate the birth of the Baby Jesus.”

In accepting the role of Jesus’ foster father, Olaguez said he also accepted “some nerves,” that he associated with performing before an audience. However, after two rehearsals and some positive self-talk, he was ready to help lead the Posadas on Dec. 23, right after Mass at St. Margaret Mary.

Olaguez has been familiar with Las Posadas since he was a child growing up in Illinois. This was his first starring role, and he kept thinking, “Don't do anything out of character,” he recalled.

The characters of Joseph and Mary walked about a dimly lit church and would encounter doorways where people would sing back and forth.

Variations of “Canto para Pedir Posada,” then “Entren, Santos Peregrinos,” which translate to “Song to Ask for Inn (Lodging)” and “Come in, Holy Pilgrims,” were sung at St. Margaret Mary and other parishes.

“I kept thinking that St. Joseph was a humble man,” Olaguez said. “At the end, my parents and cousin said I did good.”

The joy of finishing each Posadas novena day is reflected in the verses that conclude with: “Reciban esta mansión, aunque es pobre la morada, la morada se las doy de corazón.” In English: “Receive this mansion, although the dwelling is poor, the dwelling I give (it) to you from the heart.”

Some Las Posadas visitors noted that the drama of no vacancies met by St. Joseph and the Virgin Mary and the eventually warm embrace of the faithful pointed to the joy of Christmas.

At Holy Name of Jesus in Cedar Lake, Sue Kresich brought a friend along to see the parish’s Las Posadas. It was Sunday evening, Dec. 19, and the Highland resident said she had a curiosity about observing the Spanish-language novena.

Having never been to such an event before, Kresich said she was impressed by the dramatic scenes as well as the meal and celebration hosted in the church hall after the production.

“Not really understanding much of the Spanish, it was still really amazing,” said Kresich, who used her cell phone to discreetly help with translation.

Though she enjoyed the tacos and rice, pan dulce and piñatas, Kresich said the best part of the evening at Holy Name was seeing the vibrancy of the families – both young and old – that attended the prayerful reenactment.

Kresich wishes that other nationalities represented in the local Church more publicly display some of their customs to keep alive their traditions and help prepare believers for the arrival of the Christ Child, as Las Posadas did for her and her friend.

“The Posadas were really beautiful, really enjoyable, and I’m glad I went,” Kresich said. “They were so welcoming to us.”

At St. Casimir in Hammond on Dec. 18, parishioners gathered in the evening to portray the same Biblical events but in a slightly different fashion. Adult parishioners carried statues of St. Joseph and St. Mary, draped in cloth, outside the church.

Singing traditional hymns, the faithful stopped at each church door, where they received the customary message to move on, there’s no room to lodge. Finally, when they arrived at the main doors of the church, the people carrying the representations of the Holy Family were welcomed to process to the altar and conclude the ceremony.

“All of us grew up with this tradition, which reminds us of our faith, especially that great event of our Lord's birth,” said Father Eduardo Malagon, a native of Mexico, whose late parents settled in Hammond. “This keeps us focused on the things that matter, and to concentrate on the Lord’s goodness and presence.

The Hammond priest continued, “Somehow the Lord touches our hearts in these events. There’s a mystery in the participation in these events … this is a sad event because Joseph and Mary were rejected; the doors were not opened to them. But, in time, it ends well in the birth of our Lord.”