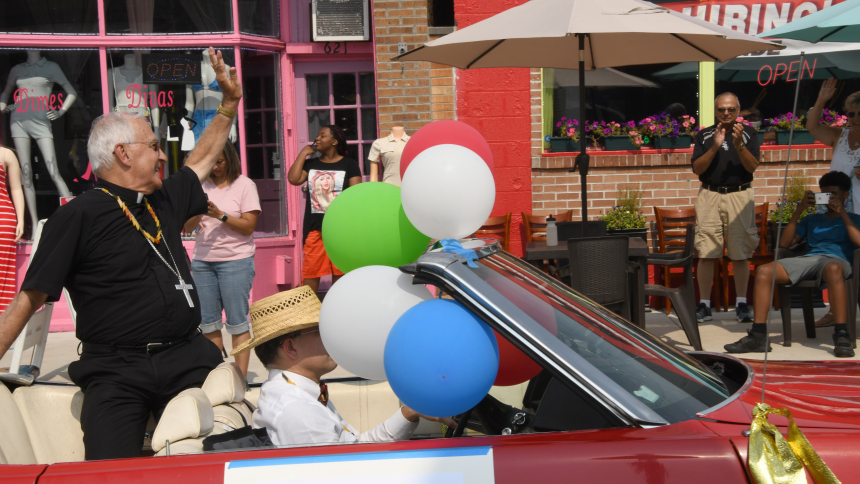 GARY – Having gotten the art of Italian cuisine and friendly fellowship down pat, members of the St. Mary of the Lake outreach committee decided to run with an idea to expand their annual Festa Italiana.

Harkening back to the days when the parish had a school and hosted sporting events and parades that drew people from across the Gary metropolitan area, St. Mary music minister Jack Denges pitched the idea of running a parade tied to the annual festival.

“St. Mary of the Lake used to be known for their parades many years ago,” Denges said. “I said, ‘the City of Gary and especially the Miller Beach community really need to do things like that.’ Then everybody looked at me and said, ‘would you like to take care of it?’”

So, long before anyone purchased noodles and pasta sauce and signed up as a Festa Italiana event volunteer, Denges was busy networking with local business, churches and nonprofits. He met interested parties in person and online. In the weeks leading up to the event, it was clear that interest in the parade idea was strong.

“I would post pictures of a parade and of clowns, or write an article online. And there were people talking to people,” Denges said. “We wound up with 40 units (in the parade.)”

Gathered near Lake Street and Miller Avenue on Aug. 7 and finding a little shade near a local business, St. Mary visitors Peter and Phyllis Passarelli, Tom Hendrix, and Henry and Carol Lazarek peered down the curved road looking for the start of the parade.

Marching with a U.S. and scouting flags, Boy Scouts from St. Thomas More troop 542 led the parade, after which Bishop Emeritus Dale J. Melczek, pastor of St. Mary of the Lake rode in a decorated classic red convertible.

Whimsically-decorated golf carts buzzed by displaying themes of Italian cuisine and Catholic clerical vestments. Every so often, the acrobatic contingent of Jessie White Tumblers would set up mats to perform for those gathered on the main business drag.

As parishioner Carole Linda cheered on the tumblers, their coach Emmanuel Magee stated that the group fosters success among young, urban youth. “Our children start at age six and go up to 30. They have to maintain their grades and stay out of trouble.”

After leading the “Pasta Palooza Parade,” Bishop Melczek stepped out of the convertible to pass out candy and greet the many bystanders lining the route to St. Mary of the Lake’s Festa Italiana.

“I’m so thankful for the blessing of this support,” Bishop Melczek said.

“We have such a great team of volunteers,” he said. “Over 50 people commit to helping with all of the donated items. Activities include a raffle, gift item auction and the biggest feature is the (homemade) bakery section… I am especially proud of my original traditional Italian sauce.

He continued, “Since its beginning six years ago (minus last year’s cancellation due to the pandemic), this has grown rapidly. We have so much community support. From The Temple, the Lutheran and Methodist churches in Miller, the Gary Mayor’s office, Chicago residents, (people from) outside the county and just so many people from all over.”

As guests entered the church hall with their meal tickets, the jazzy sounds of guitarist Willie Fultz filled the air. This year’s festival included performances by five bands of diverse musical styles.

Former classmates Jim Martin of Miller and Tim Nowak of Munster gathered among a group of visitors talking about the White Sox and Cubs City Series occurring that weekend. Nowak said he recalled the St. Mary of the Lake days of rigorous academics, fun pick-up sports games and how the church was filled with the faithful on any given weekend.

Nowak rode on a sidecar attached to Miller’s motorcycle in the parade with a banner reading “St. Mary of the Lake Class of 1975.”

“We have old motorcycles and thought of riding them in the parade,” Nowak said. “But it is hard to go and stop. So, I asked a neighbor to borrow his side car (for better balance).”

Nowak added, “My feeling about coming back to St. Mary of the Lake is that it is nothing but positive vibes – it’s great people and a great place to meet old friends.”