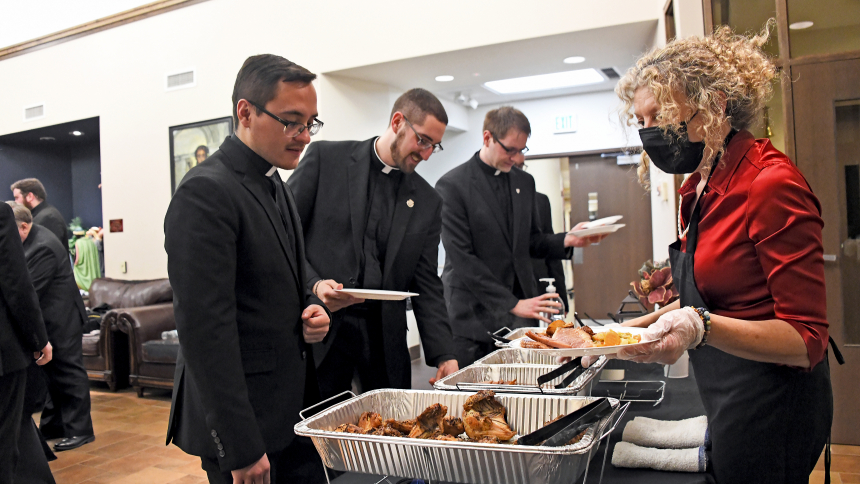 CROWN POINT – A spiritual breaking of the bread followed by a fellowship over a catered meal continued the tradition of winding down the annual diocesan seminarians Christmas retreat with a building up of the soul, mind and body.

A homily delivered by Bishop Robert J. McClory on Dec. 29 in the chapel at St. Matthias parish hall reminded 12 seminarians that edification by the faithful can strengthen those committing to the priestly ministry for the challenges of those who are less than supportive of service to the Church.

“As you proceed as seminarians, you’ll get a lot of positive affirmation … there will be a lot of reinforcement,” the bishop said of the Christmastime gatherings, including an upcoming dinner with the local Serra Club.

Bishop McClory concluded, “We seek to spread the Good News to them and have a heart that is willing to forgive … Pray God we be his faithful ministers.”

The dozen discerners who are enrolled in seminary continued with the Mass in the intimate chapel singing many Latin responses together in alto tones.

After the liturgy, the young men – from first year collegians to students enrolled in major seminary – gathered for light banter before the bishop led the group in praying Grace.

Others joked about hairstyles or adjusting to dormitory life.

“Most of the retreat takes place not during the (formal) talks,” said Diocesan Vocations Director and Chaplain of St. Teresa of Avila Catholic Student Center Father Christopher Stanish. “The seminarians run most of the retreat.

The Valparaiso-based priest continued, “It’s super inspiring to hear their stories about what they’re going through in formation. Oftentimes in conversation they’re able to share things they’ve learned in seminary.

“As priests, we’re not done being formed so we continue to receive professional development and the Lord continues to form us and mold our hearts. The Lord even uses the seminarians to inspire our faith and set our hearts on fire again,” Father Stanish said.

Ethan Vinyard, who is a first-year collegian at Immaculate Heart of Mary Seminary in Winona, Minn., said seeing good examples of those pursuing the ministry gives him confidence and direction.

Just being there and being in the company of the bishop shows that they have a common ministry as fellow “workers in the vineyard.”

One of the more seasoned seminarians agreed about the importance of solidarity.

“A huge part of this retreat is fraternity time because all of us go to four seminaries across the Midwest, so this is one of the opportunities – a great time for bonding,” said Steven Caraher of Munster, who is a student at Sacred Heart Major Seminary in Detroit. “We pick up all the jokes and conversation we left off when we were on the summer retreat.”

Yet good formation is essential for priests who have many duties in today’s Church, according to Father Edquist, who balances his responsibilities among three churches in LaPorte.

“Like in this Christmas octave, you want to be able to really delve into the mystery of the Christmas season, but at the same time, you have your mind focused on what’s going on (next).”

Bishop McClory, who expressed joy in joining the seminarians, also said things can move fast in today’s world and it may be difficult when we find a loved one or public figure in discord with Church teachings.

“Fundamentally the sorrows of the Blessed Mother were over the rejection of her son whose mission she knew was to save them,” the bishop said.

Those challenges, pains or “dolors” can be ameliorated by the people God places in our lives.

“Our vocations are ultimately supported by our loving family members, the faithful, wonderful priests and wonderful seminarians,” Bishop McClory said.

Father McDaniel, the diocese’s mostly recently ordained priest, agreed that time flies when one is a member of the clergy.

“It’s been over a year and a half since I was first ordained, and it’s gone by in a flash,” said Father McDaniel, who is associate pastor at St. Michael the Archangel in Schererville. “Through the pandemic and then some of the coming back to normalcy, people returning to Mass and enjoying some events at the parish has been a blessing.”

For more information about priestly formation or to support the diocesan vocations office, call 219-464-4042, or email Father Christopher Stanish at frstanish@gmail.com.